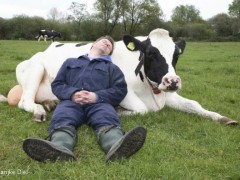 Dutch farmers are experimenting with a new way of farming: cow hugging. Big companies send their employees to hug cows for teambuilding. Even stress, burn-out and mental disorders can be solved. All you have to do is to lie down peacefully in a stable, side by side with a friendly cow.

In a small stable of a big dairy farm in the Dutch countryside, veal Loulou is curiously licking the hand of her visitors. Next to her we find her sisters Trees and Annabel and twelve others, standing in the straw. ‘They might even start styling you hair with their tongue’, woman farmer Marente Hupkes warns. Around the corner, in the big stable, we find the cows. This afternoon Hupkes is expecting a group of psychiatrists for a small company-bonding event. They will be thought how to hug cows. Why? ‘It’s both relaxing and instructive’, Hupkes says a minute later, in her spacious and cozy kitchen. She drinks her coffee out of a mug decorated with funny cowfigures. Even the walls are decorated with paintings of cow heads. There is no mistake possible: this must be a cow-loving woman.

Marente Hupkes and her husband started cow hugging as a commercial activity in 2001. That was shortly after they’d seen their neighbours wrestling with the Hand, Foot and Mouth (FMD)-crises, a very contagious disease that struck the West-European agriculture severely. After the FMD-crises, Hupkes concluded there was something fundamentally wrong in the whole agricultural industry. She wanted to show an alternative way of running a farm. Not that she and her husband wanted to give up producing and selling milk, but they wanted to find a balance between economic interests and enjoying good country life. Inspiration came from a peculiar place: Donald Duck magazine. Hupkes, mother of four daughters, read a Duckstory in which city dwellers visited granny Duck’s farm to find rest. During children visits to her farm, she had herself already noticed how cows and people can interact. Why not try and make people happy in their rediscovery of animals and peaceful peasant life?

With cow hugging, you don’t go and visit the ladies just like that. People from the city bring a whole different atmosphere with them, according to our hostess. First they have to sit down and shake their hastiness off. Then the groups, often families celebrating birthdays or teambuilding employees, start in the shed near the stable. Here they can pick their own blue overall. That’s no needless precaution, because the smell of cows easily gets into your cloths. When it’s time to visit the veals, Hupkes instructs us: ‘The most important rule is to let go of your ego. Cows are herd-animals, they want to fit in. If you don’t adept their attitude, they will walk away.’

Then we visit the bull; big and unreliable. With his weight of 1500 kilo’s (3300 pounds) he is to heavy for ‘the girls’, as Hupkes lovingly calls her cows. In her story for the business guests she always uses the bull as a metaphor for outcasts in a company. ‘He doesn’t belong to the crowd, but he is nonetheless important. He reminds us of the fact there should be place and room for everyone. He is unreliable, but when you softsoap him a bit, you even might caress him.’ And then it’s finally time to cuddle cows. ‘Move slowly, be modest’, the farmer woman instructs. ‘Pay attention to the ears and eyes. If the ears are behind in their neck it means that the cow is alert. If her eyes are half way, she is relaxed.’

Eventually a cow, that turns out to be a lot bigger then you always thought from far-of, is lying beside you in the straw. That’s really something, when you think of it: it can hardly be easy to have the weight of five hundred kilo’s on four stomaches. ‘I tell people to never lie on top of the cow but against, because it wouldn’t be agreeable for her. If you feel completely relaxed, don’t be surprised if she puts her head against you.’ Hupkes really looks forward to the summertime, when all the visitors will be lying down in the grass and cows come and sit by people everywhere. As if it’s a real herd, really. Hupkes: ‘A cow hardly ever gets angry. And if she does, there is a good reason for it. I remember a visitor who wanted to give one of the cows a Reiki treatment. I don’t know why, because the cow was perfectly fine. She put her hands close to the cow to sent energy. Suddenly the cow let herself tumble on the woman. Thank God there was nothing wrong with her. Probably the cow wanted to demonstrate that she wasn’t amused. For your information: the cow was fine too.’

The farm has a hundred cows, seventy young stock, some sheep and horses and fifty hectares (123 acres) of land. The company exists of three parts: the traditional dairy cows, a ‘carefarm’ (in which people with a background in mental health care have a working place) and the cow cuddling workshops. There’s no question that the dairy farm has the leading role. But with the low milkprices of late, the income out of the cow cuddling has become increasingly important. Most customers are found at an online presentstore, where people can find nice experiences. The other part of the clientèle is represented by companies, like a big farmaceutist, a regional meat trader or a local mental health organisation. But also managers of oilcompanies Shell and BP came by recently. Hupkes can offer them a teambuilding-experience and a way to start out of the box-thinking. ‘Finding tranquility is a thing a lot of managers lack, nowadays. The responsibilities managers are dealing with, are big. Here they can relax, and find a new perspective on their work. On a farm you can see what matters most – in working life, as well as in daily life: taking care of each other.’

Cows are splendid trainers, according to the woman farmer. ‘They act like mirrors, because a big ego or somebody’s image do not impress them. Some years ago, a group of people from a small company visited us. It was a macho boss with several female employees. The boss acted like a hen with his chickens. He thought he was great. And his female employees were hovering around him, giggling and reinforcing everything he said. But the cows weren’t impressed at all. When the female employees went to the cows, the cows laid down and the women could come near. But when the boss approached, the cows stood up and walked away. This happened several times. After a while the man realized what was happening and he asked insecure: “Am I doing something wrong?” ‘Duh’, my daughter would say. What does he expect? With his snotty attitude, nobody would feel at ease around him.’

Hupkes emphasizes she is no therapist. ‘After a session with the cows, I talk with the visitors about the behavior of the cows towards them. The insights the cows give, are not always easy to accept.’ Hupkes gives an example of two visitors who didn’t feel at ease with the cows. They kept standing around making jokes, while everybody else was hugging the cows. ‘It was to confronting for them. Their reaction tells a lot. For instance, they don’t fit in the team.’ Isn’t that to harsh of a conclusion? ‘I’m not the one saying it, it’s the cows who react’, Hupkes replies. Of course people can behave strange in the presence of cows, she admits. ‘Fear is often the main reason. They are frightened to look stupid in front of their colleagues.’ Fear is permitted, but Marente Hupkes doesn’t accept it if people won’t show respect to her cows. ‘If they are without respect, they’ll have to leave my property!’, she says fiercely.

Also top managers of a big company, involved in a reorganisation, came by for a cow hug session. That was very interesting, but also difficult, because of all the emotions involved. ‘I’d love to do that more often, but most companies aren’t ready for it yet. A reorganisation is to delicate, apparently.’ Another interesting group she likes to work with more often, is the medical motivated people. ‘Sometimes doctors advice clients who are struggling with a burnout, to visit us regularly. Cow hugging also works out fine for adults and children with ADHD.’ She nods knowingly when we bring up the autistic American professor dr. Temple Grandin, who seems to understand herd animals so well, that she designs succesfull methods to put them at ease when being vaccinated. Also, Hupkes would very much like to give courses in cow cuddling to other farmers, so there will be more to practice it. Grinning: ‘There is so much to do, still.’

Cow hugging probably is a typical Dutch phenomenon. The reason: agriculture is close to disappearing from the Dutch landscape. Farmers simply have to be innovative to survive. For Hupkes, the innovation in her farm has turned out right, fortunately. But the utopian dream she once had – changing the way we treat farm animals and the way we let economic interests prevail everywhere – she has put in the fridge. ‘For now I’m just very happy we can set an example here. That’s beautiful too.’
Next to the door in the shed, a big collection of green rubber boots is put ready. In the stable, cow Fenneke is walking ever so relaxed to the milkingrobot. It’s the third time today for her, the computerdisplay in the machine shows. Somewhere else in the stable, cow Bertha stands quietly under an automatic brush, that is hanging from the ceiling. Her skin starts to shine. Let the cuddling begin.

According to experts of the Newcastle University in The United Kingdom,
cows that are treated in a human way produce more then 258 liter milk a year extra. Dr Catherine Doublas en Dr Peter Rowlinson of Newcastle University did research looking at reducing stress levels in dairy cattle. They asked more then 500 farmers if they had names for their cows. The ones that did, had a substantial higher milkproduction. According to the researchers, cows that are treated personal are happier and more relaxt. This reduces the level of stress, and enhances the production of cortisol, which can impare the milkproduction.

Mad cow disease was in the nineties an British epidemic, but also in The Netherlands 68 animals were infected with the mad cow disease. Cause: eating infected meat (such as brain, spine, eyes or intestines). Three people died. Some years later, in 2001, there was an outbreak of Foot-and mouth disease (FMD) in the whole of Europe. This virus can cause an infection in humans characterized by blisters on the hands and the mouth. In the Netherlands alone 260.000 cows, pigs, sheep and goats were put to death. Eight years later, in 2009, goats and sheep were threatened by Q-Fever. When infected, humans can develop a dangerous fever. 2300 people were infected; six people died. End 2009 the Dutch government killed 40.000 goats on sixty farms.